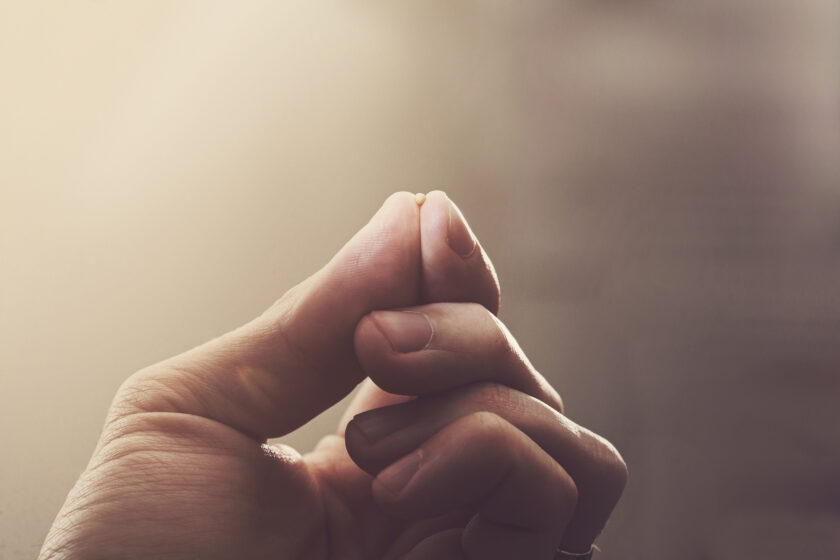 Matthew 17:20 He replied, “Because you have so little faith. Truly I tell you, if you have faith as small as a mustard seed, you can say to this mountain, ‘Move from here to there,’ and it will move. Nothing will be impossible for you.”

I have been in many churches where they have given the demonstration of a mustard seed. They tell you to place it in your hand and tell you to have faith just like a mustard seed. Yet they themselves don’t know what faith is, let alone how it operates. To understand faith you must first understand how it works. Then if you understand that, then you can know what the biblical definition of it is. According to the bible faith is the following definition:

When I ask people what this means they cannot interpret it. They just repeat what it says but yet they have no understanding or comprehension of what God is saying. Therefore so that you understand it’s operation, you will need the following wisdom to understand the definition.

Faith is to be understood as a ‘reflex.’ What is a reflex? A reflex is defined as

“An action or movement not controlled by conscious thought.” A reflex comprises three things to operate which are transmission, reception, and reaction.

A reflex  is the result of someone or something that has has been touched or spoken to.  Reflexes are an automatic response and those responses are quick.

A reflex, therefore, is a reaction to a transmission proving that you received what was sent.

That means when God gives an order or command, He is transmitting it to you. He waits for your reaction to see whether or not you will receive it. And when you receive it, will you respond with the adequate speed in performing the instruction that was sent. To receive something is not the mere act of hearing it. Part of receiving is doing what was received. Therefore He looks for you to validate that the transmission He sent was received and more importantly that in doing it, you give acknowledge Him as your King.

In this “faith exercise”, He is able to show you who you actually have faith in. If you really are in true receipt of  His instruction you will do it. If you don’t do it then you are receiving Satan’s instruction by violating a command of God.

If you violate an instruction you are receiving the instruction of disobedience by not doing it. You are literally helping Satan by making God’s command into empty words.  That in itself demonstrates that you have faith in Satan because you are performing Satan’s will because of walking in disobedience.

Whoever you have faith in is found in the response to God’s command.

If God sends you a transmission, He waits to see if you have faith in Him, because He will look at the work that He sent you to do. IF you do it, then you believe that He sent His Word and by fulfilling it, you are acknowledging that you are in Him. It is by this faith that He judges and gives to each man according to their works.

Romans 2:6 Who will render to every man according to his deeds:

Jeremiah 17:10 “I, the LORD, search the heart, I test the mind, Even to give to each man according to his ways, According to the results of his deeds.

You cannot say you receive something just through a statement “I receive it.” Faith in God requires the fulfillment of His command or instruction. However, Satan’s command is that you violate or not do that instruction. Saying “I believe it” means nothing. It just means you agree with something spoken.

You say you have faith, for you believe that there is one God. Good for you! Even the demons believe this, and they tremble in terror. James 2:19

Demons believe that God exists, but their hearts and minds are far from Him. In other words, they believe, but they don’t give God the respect and honor He deserves.

So what does a mustard seed have to do with anything?

God commands and humbly expects that everything in nature to obey His Word. Every time He gives an order everything He has created is to respond like a reflex. When He tells the clouds to send rain, the clouds respond and rains fall instantly. When the grass wants to turn green, the grass responds and turns green quickly. When He calls for the four winds to blow, the wind obeys and it begins to blow. Even animals respond to the Voice of the Creator. All of God’s nonhuman creation responds appropriately because they understand Who created them. They know His Voice and a stranger they will not follow. And yes even a mustard seed as tiny as it is, grows when it receives the command to grow. The tiniest seed with the biggest ‘faith reflex.” It hears God’s command to grow into a large tree. It responds with a yes, validating it was spoken to and begins to grow. Even creation validates that God exists and submits to His authority. His natural creation responds to His command with a yes. They hear the command and do it.

Most of us know that even animals will rise to higher ground in a tsunami. They heard and they responded. The fact they responded with movement gives evidence that God has told them to go. Human nature is given the same chance to respond.

Therefore, the quicker the response the greater the faith. This now brings you an understanding filled with the wisdom of God concerning the roman centurion.

He was a soldier who knew he was not worthy to ask Jesus for anything.  However, he knew of  Christ’s authority. He knew His Voice and how to walk in obedience to whatever He spoke. He believed not only in His Word but in His Power and Authority as well.  With his humble attitude, he was able to submit himself to whatever command Jesus spoke.

Luke 7: 8 For I also am a man subject to authority, with soldiers under me; and I say to this one, ‘Go,’ and he goes, and to another, ‘Come,’ and he comes, and to my slave, ‘Do this,’ and he does it.” 9 Now when Jesus heard this, He was amazed at him, and turned and said to the crowd that was following Him, “I say to you, not even in Israel have I found such great faith [as this man’s].”

The centurion’s response was a ‘faith reflex.’ If the Word says to do something just do it. You don’t need a sign to prove that He sent it. If it is written in His Word, because He is the Word, then He will do it. He cannot lie.  If you still doubt in His Word and His instruction, then what kind of faith do you have? Because if you say you really know who God is, you will respond quickly. However, if you have trouble responding you need to ask God to test your faith, so that you will be able to tell who is truly speaking to you.

Faith is validated in your response to a command and the wisdom of God is found in the response. Whether that command comes from a lie or whether it comes from the Truth, you will be judged according to whatever or whoever you believe. Why?

For this reason, Jesus said “Believe in Me.” While Satan will twist God’s word and say “believe in me”

If you are firm in saying that you definitely know that it’s God giving instruction, why aren’t you doing it? If a mustard seed can respond to the commands of God and grow, how much more will you be able to do?

When God sends an instruction. The evidence of that instruction is your reception of it. That reception is validated by doing it. When we validate Him by doing it, we are giving others evidence of the unseen God. Our faith is a substance when validation is seen before man. People can see that God has spoken to you and given you command.  And when you do what He asks, you will see what  He has promised and what had you hoped for.

A mustard seed is tiny. It size also relates to the amount of time it should take you to respond. If you have faith and respond in this much time, you demonstrate how quickly a mustard seed responds to the Voice of the Lord.

Faith always begins with a Word from God. When He transmits it to you, when you receive and when you react or respond to it, you are a demonstration of having faith just like a mustard seed also has faith. If a mustard seed can respond so that God can make it grow, then how much more will He make you grow?

It is important to note that the mustard seed doesn’t grow itself.  Rather the mustard seed grows because it responded to the command and Word of God. The mustard seed cannot grow without its response of “yes.’  Therefore if you have faith as a mustard seed, you can tell the mountain to move and it will move.  That is because the mountain knows how to respond to the voice of the Lord.  The purpose of faith is to prove that God exists. You prove that He said what He said by what you do and not merely by what you say.  This is the faith that pleases God because you are proving to the world that He exists. You will be richly rewarded for it because your ‘faith reflex’ will cause others to seek Him.

Hebrews 11:6 English Standard Version (ESV)
6 And without faith it is impossible to please him, for whoever would draw near to God must believe that he exists and that he rewards those who seek him.

Noah and Abraham as well as many others gave evidence of God through what God had commanded them to do.  They had faith that was based in trust in what they could not see while giving evidence that what He said will be seen. God is looking for faith like these? And now that you understand it with wisdom, it should be easier to respond to His Word and command.  May you begin to see the evidence of what needs to be seen.