God’s Glory Is On It’s Way 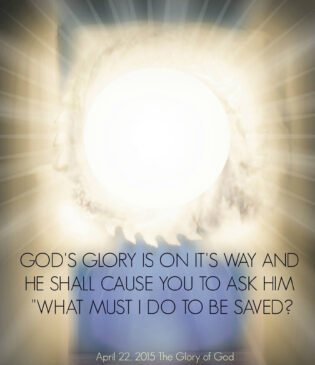 Yesterday I posted the following: On April 22, 2015 I had a prophetic dream and many visions since then..the dream involved a hurricane with edges that looked like a circular saw blade..I saw it after I had seen a wall of rain that extended from the top to the bottom of the sky…the wall of rain was like a giant set of drapes or curtains…when the rain curtain opened up it revealed the hurricane/saw which was bright as the sun….then an angel spoke to me …after that when I saw the hurricane saw…all I could say was Oh My God…Oh My God…I was terrified at the wrath and trembled at His Holiness…then another angel spoke…I woke up was shaking heart racing and sweating….since then God has been revealing a lot of things especially people who are not what they seem….there were a lot of things God has and been continuing to say and do…I have been somewhat in seclusion as far as posting goes…because I have been showed alot of things concerning this dream and the details of the message within it.. It is then that the circular saw which I had seen, will be signaled to begin. That signal will contain a message. When you see the first storm appear, the message will be given out accordingly. It’s time to ‘get inside.’…the hurricane/storm that appears marks the validity of the message. The glory of God is on it’s way. When you see the storm, know that God is at your door. God is coming with glory. That glorious understanding will soon be given to you.  (2 Corinthians 13:1) have begun to reveal what God is saying to ALL HIS PEOPLE…His People are those who use His Name in any fashion or form. That post is below this one. Hear the Word of the Lord.

Wisdom Calls to The Way